Women are constantly accused of trying to change the men in their life.  Many are 'guilty as charged' because instead of coming to terms with the fact that the man may possess intolerable qualities, they instead believe they can actually 'fix them.'

There is a large amount of truth in the idea that you can't change a person.  However, I do believe that you can teach them to 'adapt.'   What's the difference?  It's a very fine line.   It all depends on whether the thing you're trying to 'change' is a 'bad habit' or actually a 'personality disorder.'

Doesn't call when he's going to be late--bad habit

If women are going to get along with the opposite sex they need to accept that there are certain unchangeable traits are embedded in their personalities. These traits just can't be 'fixed.' If you want control of the remote, get a second TV.  If you want more romance, watch a Lifetime movie.

It's the 'learned behaviors' that you actually might be able to change.  Just like Pavlov's dogs, with the right amount of repetition, these things can be unlearned.   You just have to use the right mix of logic, discipline and sometimes a little female manipulation.

The current man in my life is phone impaired.  He travels a lot due to his work and has a terrible track record of keeping in touch while he's away.  Although his heart is in the right place, he has never been in the habit of 'staying connected.'

Recently a severe hurricane was due to strike our area while he was away.  The forecast called for dangerous driving conditions about the time I'd be leaving work.  It seemed only second nature that he'd be calling to make sure I arrived home ok.  Much to my shock and disappointment he didn't even pick up the phone until after 10PM that night.  When I called him on his lack of concern he responded,

'I was worried.  In fact I was telling my buddy how concerned I was about you while we were in the pool.'

I guess I was supposed to be touched that my safety during this storm popped into his brain once in-between laps.  Little did he realize by that point I could have been in a severe car accident and in the hospital on life support for at least three hours.

How did I handle the situation?  I took the phone off the hook at 10 PM and shut my cell phone off.  He actually didn't get to talk to me until the next day.  Five phone messages and three emails later he found out I was ok.  He suspected I did it purposely to make him worry.  Some may look at this as immature. Maybe it is, but I was really at the breaking point. I'm not proud of being so manipulative but the point is that he learned.

A friend of mine is in a relatively new relationship and her biggest concern is that her beau is very quiet.  He doesn't talk much when he's around her friends or family and it tends to make her uncomfortable. When she wants to discuss an important issue with him on the phone he doesn't give much feedback.

Unfortunately, this is a prime example of a personality conflict. You can't turn a reserved person into a more outgoing type. Her only hope is to decide if it's something she can live with.  I spent five years with someone who was extremely quiet.  Although he was an outstanding listener, I craved verbal response. Inevitably it was one of the many reasons we broke up.  Ironically, even when I ended the relationship he had nothing to say.

We all search for someone to love us for exactly who we are. It may seem hypocritical to try and adapt our partner to suit our needs, but the reality is that we're adapting at the same time. You may find yourself doing more 'little things' for him because he appreciates it more than your last beau. You may find yourself acting less jealous, because he won't tolerate any possessive behavior. You may find out that you actually like watching NASCAR or that super hot chicken wings aren't so bad.

It's when he doesn't like your Friday girls night or that he wishes you showed more interest in his ferret that the problems begin. That's the road to personality conflicts. You can choose to spend the rest of your relationship fighting to create someone that doesn't exist or you can be realistic and look for someone who really does have the traits you're looking for.

When you find him you may still have to get him to stop leaving his laundry on the bathroom floor and he may want you to spend less time watching 'Lifetime'. Bad habits are easy to break.

It's the personality disorders you need to run screaming from. 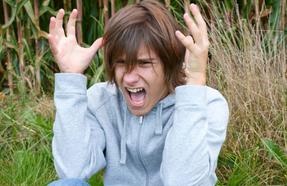