Bill and I broke up last week so I ‘m expected my membership card to arrive in the mail any day now. After all, I’m about to enter one of the most prestigious organizations in the country—“Bill’s Ex-Girlfriend Club.” I’m not really sure what the total membership is, but it appears to be massive.

Truthfully, after two months of listening to Bill talk about his harem of exes my opinion on the whole subject has never changed. I stand by what I said from the very beginning.

“Bill, this is one woman that will never be a member of that club. When I’m gone…I’m GONE.”

So, is it me? Am I the one with the twisted thinking because I feel that once a relationship is over you should both move on? I believe in an amicable parting, but I never saw maintaining friendships with your exes as anything more than an excuse for potential hook-ups when you’re both lonely. While I may be the extreme in thinking “cut all ties”—Bill was the other extreme in terms of “staying in touch.”

Just to give you a small taste of Bill’s harem—we’ll start with Cindy and Kathleen. In a nutshell, Cindy and Kathleen were childhood best friends. Bill was very serious with Kathleen. However, Bill then cheated on Kathleen with Cindy. Kathleen and Bill broke up but Cindy and Bill stayed together. Needless to say the friendship between Kathleen and Cindy ended but Bill somehow managed to stay friends with both women. While dating his “mistress turned girlfriend” Cindy, Bill went away for the night with Kathleen—“as friends.” He proudly stated, “Cindy trusted me.” All I could think of was—“What a silly naïve girl?” Bill of course eventually broke up with Cindy and she proudly joined the X-Club. Cindy has also befriended Leslie—another ex of course! Bill goes so far as to take both Leslie and Cindy out together. This was in-between his dates with me--a future member of the club.

Are you following so far? If you find these scenarios a bit twisted, you’re not alone. It almost seems that Bill dates purely to increase membership, rather than looking for a lasting partnership. Do you blame me for not wanting to join this club?

I’m willing to play devil’s advocate. Maybe Bill is just a nice guy and it’s a credit to his character that he can maintain friendships after a breakup. But so many?

I always felt Bill was a bit insecure and had trouble “letting go.” Bill’s ego seems to feed off of being surrounded by women that he “conquered.” They certainly give him enough attention. They actually fight over him. Leslie got mad one day because Cindy got to spend the day with him “alone.” The best part is that Leslie is married with kids! I’m sorry…but his relations with his harem never seemed healthy. Would any woman want to be involved with a guy who carries on these types of friendships?

So when it comes to an “X-Club” there are two questions that come to mind.

When a person has been a significant part of your life for a very long time, it does seem sad to have them completely leave your life because of a breakup. When someone has shared a truly deep and lasting bond with their former—I support a friendship. However, I believe that these kinds of situations are rare and special.

I also believe that no matter how important that friendship is you shouldn’t let it get in the way of building a new relationship. Potential new partners have a right to feel a certain discomfort when you befriend former lovers. Yes, your new partner should trust you…but trust is also earned. You need to show them that they CAN trust you. There should be no mystery to your friendship—nothing to question. Keep your partner well informed as to what you and your ex really share.

One of the keys to maintaining a healthy relationship with you ex is making sure that both of you have enough emotional distance from the past. Sometimes this requires a period of separation before you can find each other again. A one-sided friendship can always lead to awkward situations so it’s important that you both are “over it” for sure.

One of my final issues with Bill’s harem was a date he made with an ex for her office Christmas party. He described her as someone he had no interest in but said she wanted more from him. He felt the date was justified because he told her he was only going “as a friend.” Considering they had no established friendship and she still had a crush on him—I never understood why he was going with her in the first place. Actions speak louder than his words and I felt it was unfair to her feelings to attend her office Christmas party under those circumstances. Even though we had no spoken commitment—I also felt it was a bit unfair to me. After all, why is he still taking up time promoting harem membership when he’s dating me?

That’s brings me to my final thought on the X-Club. If you have one, make sure it has the proper priority in your life. If you ever want to find the one woman or man who would NEVER be eligible for membership, you need to make sure that they can establish some sort of priority status of their own. If your X-Club is filled with “true friends” they will remain your friends no matter what. They should also support your quest to find lasting love and not try to maintain “property rights.” As long as you or any members of your X-Club are living in the past—you’re never going to find the future you always wanted.

As for Bill’s X-Club—I anticipate the membership will continue to grow. I expect it to go national by 2006. I don’t regret not joining. The occasional meetings might have been fun.

But frankly, I’m not that bored with my life. 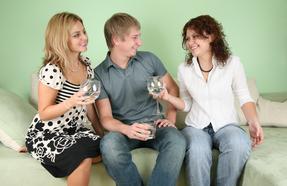 "Using the Phone As A Weapon In Relationships."

"Signs He Doesn't Want A Relationship"