I admit it.  I like complicated relationships.  I must because that is all I seem to have attracted in the last two years.

It kind of frightens me to think these are just the most recent chapters in my love life.  Women have always been accused of only liking men that don't treat them well and looking back I might have to finally say, "guilty as charged."

What is it about women that makes it so hard for them to end bad relationships?  We always seem to hang in to the bitter end.  We're caught up in thoughts of "what if?"  We hang onto fleeting hopes that "maybe things will change."  At best we won't even think of breaking up with a guy until we have a replacement!

Ever hear the expression, "If it looks like a duck and walks like a duck--IT'S A DUCK."  The same is true for BAD BOYFRIENDS!  When you find yourself constantly making excuses for your relationship it might be time to throw in the towel.

"He said he has always had a problem with being self-centered.

But he's working on it!"

When you're in a serious relationship it's supposed to bring happiness to your life.  Of course no relationship is perfect, but when the bad starts to seriously outweigh the good, it might be time to bail.

Deep down we all have a mental list about what we want in a relationship.  It's a "wish list" of common interests, backgrounds, personality traits and more.  When you find someone that possesses a large amount of the items on the list -- that's the one that usually turns into a relationship.

However, it's always the "good list" that we pay attention to first.  It usually takes a longer amount of time for a woman to come to terms with the fact that her guy has more of the things that she doesn't want than those that she does.  He is good looking, intelligent, fun and charming.  Yet, while we're swooning over the dozen roses that just arrived at work we instantly forget the fact that:

·     He puts his friends before anything else

·     He never takes an interest in your life

There are also probably at least a half dozen other things that we choose to remain in denial about. Even if we get to the point that we realize that he doesn't make us happy any more we refuse to make any, "quick decisions."

"We have plans with his friends this weekend.

Let me just see how that goes before I decide."

"The holiday's are coming up.  I can't break up with him yet."

When it comes to relationships, women take any excuse to avoid what is leading to an inevitable break up.

If women have a hard time leaving a bad relationship, it can be even more difficult to get out if the relationship is good.  Even the best relationships can be cursed with the "no future" clause.  Unless you're completely comfortable never getting married and spending time with someone who's stay in your life is guaranteed to end, it's important to walk away from something that's "going nowhere" before you get seriously hurt.

Like it or not there are men in this world who are true "commitment phobes."  They are incapable of ever tying themselves down to one person on any permanent basis.  You could be the most amazing woman he'll ever meet in his life and but his inability to truly commit will never change.  I'll never forget the day one boyfriend said to me,

"I only love you as a friend and I'm pretty sure I'll never marry you."

Ever ounce of my body said, "Run screaming" at that statement.  However, because our relationship was "so good" I stayed believing he just needed time.  It took me 2 1/2 years to get the courage to leave.  At that point, five years of my life had passed while I was with him.  While all of my friends got married and settled down I was trying to "fix" my mate to no avail.  It's frustrating to think that while I could have been finding "Mr. Right" I was spending so much time with Mr. Wrong.

It's even more frustrating to watch myself go down that same path again.  My current "beau" it attempting to have his first relationship since his divorce.  Not only have I taken on the emotional turmoil of a bitter custody battle I am faced with his own confusion about being involved with someone after such a painful breakup.  One day we're as close as two people could possibly be and the next I'm struck with hateful statements such as, "At this point in my life I'm not willing to answer to anyone."

Why do I stay?  I stay because the relationship is so "good."  At least that's what I keep telling myself.  We're the best of friends and have tremendous chemistry together.  He's good looking, smart, intelligent and funny.  We have all the same interests and understand each other without words.  Sounds simple enough right?

The unfortunate reality is that he's still "damaged goods."  He's probably incapable about being serious about anyone for a long time.  Odds are also extremely high that when his wounds from his marriage heal, he'll be looking for something new and not looking at me.

It has only been a few months and that leads me to still rationalize out why I stay. Past experience has shown me though how quickly a few months can turn into years..

I also don't want to admit that the longer I stay the more painful it will be to leave.  I estimate I have only about 10% odds of this relationship working out.  Just the fact that it's his first relationship after his divorce makes my chances very slim.  So why do I stay?

Neil Sedaka said it best.  "Breaking up is hard to do."  If I possessed the incredible male ability to "turn things off" I would walk away today.  Instead I run the scenarios in my head of what it will feel like after he's gone.  The pain, the anger, the loneliness--who wants that?  The worst is when you second-guess yourself.

"Did I do the right thing?"

"What would have happened if I just waited awhile?"

It's never simple in the mind of a woman.  This truly is the spineless insecure approach but we're all guilty of it at some point in our life.  It all depends on the level of emotional investment.  The more they have your heart, the harder it is to take it back.

I spend my days building my inner strength.  I work on being more comfortable with myself.  I study the male mind and how easily they don't let emotions control your lives.  I'm actually hoping that soon I'll be able to handle my situation just like a man would.

I call him up and tell him it's not working out.  He says ok and that he understands. I'll then go out and have a beer and watch the game with my friends.

Life seems so much simpler that way. 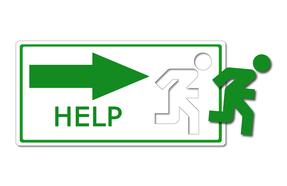 when is it time to leave?