I DATED A MARRIED MAN,

Right before I began my last relationship I was evaluating my dating experiences over the previous year and a half. I tried to find humor in what had been a tumultuous experience.

"I think I've just about seen it all. I haven't had a married guy yet though."

As they say, hindsight equals 20/20 and I think at that moment, like a bizarre cosmic joke, I met Michael.

A friend of mine had once told me that she had heard that something like 35% of the people who try internet dating are married. That's how I met Michael. He responded to my personal ad and described himself as "recently returning to the dating scene." His profile stated he was divorced with children that didn't live at home.

When Michael and I first met I was immediately cautious because he told me I was the first woman he dated since his divorce. He claimed that I was also the only one that he emailed. When the red flag of "rebound relationship" went up Michael tried to reassure me that he knew what he wanted because it had been 2 1/2 years since his separation. He had taken that time to recover from his divorce and make sure he didn't bring any baggage into a relationship.

Michael was an extremely good looking, charming and intelligent 37 year old man. Not to mention, he was in absolute perfect physical condition. If I wasn't so taken in by his sparkling smile I might have realized that it didn't make much sense that he hadn't had contact with the opposite sex for more than two years. Unless he had a severe case of agoraphobia until the day he met me, it was difficult to believe he never had another opportunity to meet a woman. I was at least skeptical--but he was pretty convincing.

This is only beginning of what proved to be a six week relationship filled with questionable behavior. He was starting to show textbook signs of a married man searching for an affair.

What are the signs that you're dating a married man? I did some research and this is what I found out.

1) He is extremely secretive about his life.

When Michael and I were apart, he never shared any detail of how he spent his time. He seemed opposed to calling me on a regular basis just to share our day. He claimed that he was so used to living on his own he had to learn how to share his life again. He couldn't even seem to be honest and forthcoming with his work. The night I met him he told me he was a chemical engineer. One week later I found out he wasn't employed full-time. He only consulted. Two weeks later I found out he was getting very little consulting work. At the end of our relationship, he claimed to be unemployed and the stress of finding a job prevented him from giving 100% to our relationship.

2) His attention is inconsistent. He can only call you at certain times or see you on certain days.

Michael had us regimented to a perfect schedule of Tuesday nights and one night during the weekend. At times he was completely interested in talking to me and claimed to miss me when I wasn't around. Other times he seemed to disappear into his apparently self-absorbed world. When we did talk on the phone it always seemed to be while he was driving and he had to immediately hang up when he arrived at his destination.

My only means of contacting Michael was through his cell phone and email. He claimed he was temporarily living with his father and didn't want me calling that number. However, he never seemed to answer his cell phone. It could take anywhere from 5 hours to a whole day for him to return my calls. His excuse was that he always left his phone in the car or it was never charged. However, whenever he was with me his phone was glued to him and he constantly checked it for messages.

5) He wants to move the relationship romantically and intimately at an unreasonably quick pace.

When I met Michael I was dating someone else and he immediately started pressuring me into a commitment. When we still hadn't been intimate after the second date he told me how he shared this with his friend and his friend was shocked. Michael quickly pressured me into what proved to me a completely emotionally unsatisfying intimate experience. In fact, the first time we were intimate it was so aggressive I was frightened and had tears in my eyes.

6) He doesn’t introduce you to his friends or relatives.

On New Year's Eve Michael introduced me to a friend and his wife. You might think this would be a clear indication that he was divorced. However, my friends quickly pointed out to me that the friend I met just may have supported his infidelity. In the month that followed, he never showed any interest in showing me his life. He claimed he didn't want to be seen with me in his home town because it would get back to his ex-wife and make his custody fight more difficult. In the entire 6 weeks we were together, Michael always came to my place.

It wasn't until two weeks after the relationship ended that I started to put more evidence together. Michael had offered to take me to a bed and breakfast for the night. However, he insisted on having me make the reservation. I found this strange and when I protested he kept saying,

"We're in a relationship. This is a team effort. The woman makes the reservation." His insistence puzzled me but I never saw it as an indication that he was married. My friend then pointed out that a married man wouldn't have wanted to put anything on his credit card. If he made the reservation he also ran the risk of receiving suspicious phone calls or mail. It was at that moment I realized, "And then he would have paid cash when we arrived."

One time I actually accused Michael of still being married. His only rebuttal was, "If I was still married, how would I be able to stay over your apartment?"

My response, "Ah, duh. You wouldn't be the first married man to get away with that."

Plus, when he did stay over, many times he was unusually anxious to leave. A few times he would even rush out early in the morning. He never gave me a "valid" excuse until the last week we were together. He once again claimed that he felt guilty looking like he was shacking up with his new girlfriend while he was unemployed and living with his father.

Looking back at it all I feel completely foolish for getting sucked into Michael's web. I'll never know for sure if he was just really lousy at relationships, inherently selfish or married. The biggest lesson I learned from the whole experience is no matter what trust your instincts. From the very beginning Michael never gave the honesty and caring behavior that should be a part of any healthy relationship. His flaws went well beyond his sketchy behavior. He was also extremely critical and at times insulting. I quickly found my self confidence plummeting in his presence.

I may have known he was bad news from the very beginning. However, at least in the end I know for sure that I and anyone else--deserves better. 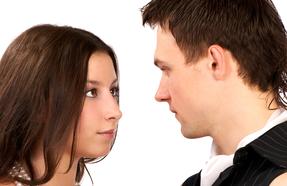