The one thing I noticed about being single and over thirty is that not only has my love life reached a slump, my social life overall appears to be in need of an overhaul. It seems that as every week goes by I'm growing further apart from my friends. Is it because I've become completely socially incompetent? At times--I do wonder. However, lately I'm beginning to wonder more if it's just because every one I know is married.

No one ever wants to be the last single friend. By the time you're thirty it gives you nightmarish visions of being invited over to dinner parties to be fixed up with the "divorced guy from work." My friends' "married phase" began when I was in my late twenties. It recently concluded with an engagement just after Christmas. I never wanted to believe that this should change my friendship with anyone. I do have to admit that it was difficult to find myself heading down the cliché road of "always a bridesmaid, never a bride."

When I started to complain about their changing lives I'll never forget what one person said to me as comfort.

"You think that's bad…wait until they get to the baby phase."

Well, several years later--the baby phase has arrived! It doesn't bother me that they can't go out anymore. Frankly, what would we do anyway? I'm really tired of the bar scene and I get to see enough movies when I go on dates. I'm actually pretty content going over to their homes and playing with their children. I only have one niece in my family and the opportunity to be "Auntie Barbara" to my friend's children is somewhat thrilling. For the last few years like a trooper I've heard about mucus plugs, breast feeding and developmental disorders. These are all subjects that I can't identify with --AT ALL--but I immerse myself with tremendous interest in all these conversations.

It all seemed nice in theory. Even though our lives were different, our friendship didn't have to change. However, as more and more time went by I realized that something was missing with all the "married people" in my life. Sure, I could live in their world and talk about things that were now of interest to them. Yet, somehow they couldn't identify with my world anymore. You would think in theory that someone happily married would want their single friend to find true love too. Do they even ask? If it isn't something that would appear in a current issue of "Today's Baby" or merit a trip to Home Depot, they apparently weren't interested at all.

Now does this make any sense? I've never been married…never had children…yet I find a way to take an interest and mix in their world. They on the other hand used to be single. You would think it would be easier for them to keep up with me! I'm beginning to believe that once you find your perfect mate, you refuse to remember the single part of your life.

To make matters worse, all of my married friends seem to predetermine that I can't be happy spending time with them. Even the ones who don't have children like to apologize for "being too boring." I don't really understand what they think I'm looking for at this point in my life. Somehow, watching a DVD in their living room isn't good enough for me! Don't they understand that I'm just happy being with my friends? At the same time it makes me feel as though they aren't happy spending time with me.

When you're single and the weekend arrives, your natural inclination is to want to spend time with your friends. However, if all your friends are married it seems that you're always going to be the one doing the inviting. I guess I can't blame my married friends for being this way. When your home comes with a built-in companion you don't exactly sit around on a Saturday night saying, "Hey honey, why don't we invite Barbara over."

This is why I've been forced into the position of inviting myself over. When it looks like a solid weekend of sitting home alone, I spin the married friend wheel and decide who I'm going to go visit. This can turn into a really interesting adventure since many of my friends live out of state.

I truly do want to see my friends. They've always been a priority in my life. I'd much rather spend time with them then even go on dates. However dating lately has become a necessary substitute for a lack of friend time.

It's difficult inviting yourself over to someone's house. They all say, "You know you have an open invitation to come over" but it would still be nicer to be asked. Especially when nine out of the ten times that I do ask they say, "well we're not doing much--if that's ok with you." Gee, could the invitation be any warmer or fuzzier?

There's no grand conclusion to the problem of having too many married friends. On the upside it has forced me to be more comfortable spending time alone. I've also gained the confidence to do more things on my own like going to a movie (matinées only!) or sitting at a bar to have a drink. If there was a match.com site for making single friends I would most certainly join in a heartbeat! However, the older you get--the harder it is to find single friends. I make friends easily but all my new ones are also married!

I do sometimes fantasize about how my married friends would feel if they were in my shoes. The people I work with like to joke,

"Our spouses could step off the sidewalk, get hit by a car...and BAM! We'd be in Barbara's shoes."


It's a morbid thought that I wouldn't wish on anyone. Yet, there is some truth to it.

Another person also said to me,

"Don't worry. It's still early. Wait until they hit the divorce phase."

I'm very lucky that all of my friends are really in good marriages. I certainly want them to last. However, if you do look at the statistics, the odds are very high that at least one of them will eventually split with their spouse.

If I was a vengeful type person I might be comforted by thoughts of them returning to me when they were suddenly thrust back into the single world. Only, at this point I'm the one who's happily married. I could see the conversation now.

"Oh yeah? Where were you when I was single?"

I'm happy to say I'm not that kind of person. The truth is that I've made a promise to myself after watching my married friends start to drift. That promise is to never forget my single friends. I will always keep my life open for the people I care about…no matter what their current social status may be. I'm the kind of person that wants the people in my life to be happy--no matter what.

They say you should live every day as if it were your last. That means you should really value everyone and everything that's in your life. After all, it could all change in a heartbeat. Married people might look at this story and think that they've drifted from friends just because, "they have nothing in common anymore." However, I see it as more of a "married laziness." It's just easier to surround yourself with couples. In the process, you're probably negating one of the most loyal people you've ever known.

If I could sit with my friends and talk about redecorating the living room and hear incessant complaints about how their husband is a slob, they can most certainly find some level to relate to me on. Not for anything else…we all have jobs. How about asking me about my job? Hell, I'd be happy if they'd ask me what I had for dinner! They do eat too, right? I still have a family too. I may not have a husband or kids, but I have a niece, a mother, a father, a sister…plenty to talk about.

I may be single…but there's a hell of a lot more to my life beyond my marital status. Even if my married friends don't seem to realize it at times…at least I do and I'm a better person for it. 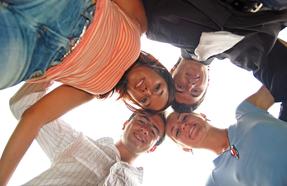 can married and single