What is it about the phone that makes it such a powerful weapon in relationships? The second a woman meets someone new; the phone immediately starts gaining its control. The process begins by filling a woman’s head with one simple feeling:

Even if she takes the more modern approach there are still lingering questions.

Suddenly, this person who was a stranger in her life the day before has immediately started giving tremendous powers to what is simply a small electronic device— the phone. Why all of a sudden does it matter if he calls? Why does it matter when or if she calls him? It certainly didn’t matter the day before when she didn’t even know that he existed.

As the relationship progresses the reality of how powerful of a weapon the phone can be becomes increasingly clear. Thoughts of “Will he call me?” suddenly become replaced by “Why hasn’t he called?” The simple act of dialing seven digits has now becomes the emotional thermometer for the relationship.

“He always calls me by noon. What could he be doing?”
“He said he’d be home by midnight and I still haven’t heard from him.
This isn’t a good sign.”
“He used to call me every night before he went to bed. Did I do something wrong?”

When you think about it, it seems almost absurd to put so much emphasis on a phone call. However, as women we tend to over analyze everything. The phone is our symbol for his patterns of behavior. Change those calling patterns and our walls of defense go up. Paranoia, anxiety, depression all becomes symptomatic of the simple fact that he may not have called.

Ever since the advent of call waiting and caller ID a woman can’t even calm herself by trying to
rationalize why he hasn’t called.

“Maybe he called while I was on the phone and couldn’t get through.”

Back in the day there was comfort in convincing yourself he was stopped by a busy signal but
thanks to Call Waiting you know must face the painfully reality that he never “beeped in.”

“Maybe I was out when he called.”

Caller ID is not just a wonderful invention to screen out calls from your mother. It’s a wonderful opportunity to prove whether or not someone called when you weren’t home—even if they hung up. Of course today’s woman can always rationalize that the call marked “Unavailable” was her beloved calling after he blocked out his own Caller ID. Even after the invention of Caller ID and Call Waiting many women could still comfort in one more possibility.

“Maybe he was out and couldn’t get to a phone.”

Ladies, kiss that excuse goodbye! Ever since mobile phones have taken over our culture faster than the SUV, it’s easier to find a man who does carry a wireless phone than one who does not. This is the point where the extreme anxiety and paranoia sets in. What can cure this disease of emotion? The answer should be obvious—the phone.

Hours of restless behavior spent waiting for the phone to ring are quickly replaced by an intense feeling of calm when he finally does call. Suddenly previous moments of obsessive and insane behavior become unimportant. All that matters is the sound of his voice on the other line. Then fact that he dialed your number has now become a powerful declaration of emotion.

“He does love me! He called”

The phone certainly does make women think and do crazy things. There probably isn’t a woman alive who hasn’t called a love interest and hung up. At the time it seems like a completely rational thing to do.

In reality, it’s no more rational than driving by his house to see if his car is there. These behaviors are nothing more than the early forms of stalking behavior that seem to be inherent in us all.

It has been said that the people you can hurt the most are the ones that you love. With this in mind, the phone can easily be the ultimate weapon in a relationship. When things reach a rocky road, and irrational angry behavior sets in, both parties would be better off staying far away from any form of telecommunication. When you’re in the initial “honeymoon stage” of a relationship you can spend three straight hours on the phone talking endlessly about nothing as you exchange sugary sweet compliments with each other.

Flash forward and it’s only a matter of time before the first phone fight begins. Fighting on the phone can redefine the concept of “fighting dirty.” Without the visual aids of your partner’s facial reactions, you are left open for a full-fledged verbal attack. Without the benefit of being able to see each other’s expressions a conversation can quickly turn into a no-holds-barred war of words. All sense of reason and composure immediately go out the window.

As far as you’re concerned, aside from the voice on the phone, you are alone and can do whatever you want. Both parties tend to say and do things that they would otherwise never imagine doing to one another in person. You can mouth expletives about your partner without them seeing or hearing them. You can throws things and make obscene gestures and your partner is none the wiser.

However, the downside is that you are stirring up so much anger in each other that the conversation inevitably leads to the proverbial hang-up. The hang-up is the ultimate act of power in a phone fight. It’s much more effective than storming out or walking away. The results are immediate and effective. Your partner is cut-off. You have taken full control over the conversation and ended it. You had the power and used it.

Ever since the phone was invented, the hang-up has probably been a permanent end to many relationships. The hang-up is the final act of power with the phone, but it only leads to a bigger power struggle—the struggle of egos. The partner who hangs-up is probably very tempted to call back after a few moments of cooling off. However, this is where the big stand off begins.

The person who hung up will ignore every part of their body that screams to call back and apologize just to “save face.” The ego can truly be a powerful force in these situations. Calling back would negate every “purpose” in hanging up in the first place. The battle for power has officially begun.

The partner who was hung up on goes through a similar mental struggle. They are angry to be victimized by this vicious act. However, if they call back and express this anger, the “hangupper” will have achieved their goal for domination. The only way to fight a “hang-upper” is to ignore the fact that they hung up. However, the victim will still second-guess themselves as they contemplate calling back.

“Maybe I took it too far.”
“Maybe I should apologize.”
“Maybe I’ll just be the better person and call back.”

Like the classic game of chicken both parties will anxiously wait and see who can go longer without calling back. Sometimes it takes a minute.

Sometimes it takes a day.

“I would have called you sooner but I needed some time to think and cool off.”

Sometimes it will take years for that phone call to finally come.

“I went to that Italian restaurant where we used to have lunch and I couldn’t help but think about you. How did we ever lose touch?”

Sometimes that call back will never come at all.

“Oh Dave—I haven’t talked to him since I hung up on him. I feel sorry for the girl that’s putting up with him now.”

It’s all part of the amazing phone dynamic that’s an integral part of any relationship. You can try and fight it but you can’t escape it. From voice mail messages to drunk texting—the phone can be a powerful weapon for steering the course of your relationship. Use it wisely. 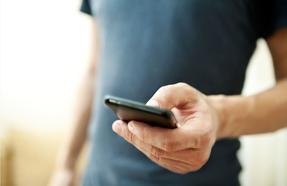 "Using the Phone As A Weapon In Relationships."

"Signs He Doesn't Want A Relationship"

USING THE PHONE AS A